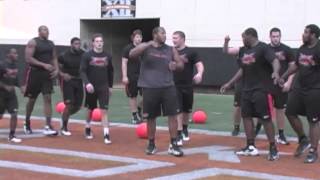 Off-season workout for football players is crucial to their preparations for their upcoming season. It is when they have the chance to condition themselves mentally, emotionally, psychologically, and, most importantly, physically. Integral to the off-season football workout is a program built on developing as much muscle and endurance as possible to get their bodies as fine-tuned as they can, so they can go on to doing more tactical trainings as the season approaches.

This workout plan focuses on the muscles that are crucial to football players, most especially the chest, shoulders and triceps. It starts with the core to develop stability and ab strength, in preparation for the rest of the workout. According to Stack.com, Hicks and Freeney believe that it is imperative to begin training from the belly, which serves as the body’s source of power.

Freeney argues that football players seldom strike with both arms at once, so it is important to do workouts such as dumbbell power during off-season training in order to train the arms to work independently, with both strength and speed. On the other hand, workouts such as dumbbell incline workout a different part of the chest and prepares the shoulders for more demanding lifts.

Football players need to be quick with both their lower and upper bodies, especially when they need to strike and take off from the ground quickly. For this purpose, plyo push-up adaptations are very important to develop upper body power output. To Freeney, “chest, shoulders, and triceps are the ammo, but the hand is the bullet. In order to hit harder, the hands need to move faster.”

By the time you get to the rip and press workout of the program, your body will most likely be fatigued, and will have difficulties performing the exercise. However, this is the purpose of it. It imposes the challenge of being explosive even when the body is tired.

Football players are highly-susceptible to shoulder injuries. This is why it is highly important for football players to build mass around their shoulder joints during their off-season training. This will help to keep them from getting injuries in the long-run. In this case, the shoulder circuit will be of great help. In addition, the rear delt raises with punch will help generate swift and powerful movements.

According to Stack.com, machine hang shrug develops triple-extension explosion. With this, the strength and energy is drawn all the way from the ankles, to the knees, to the hips, and to the upper body to deliver a violently strong blow, similar to the slobberknocker.

The tricep circuit is used in this workout plan to deter the tricep muscle from fatigue before doing the last exercise of the program. Generally, it will work out the long, middle, and inner head of the tricep.

To finish it all off is the single-arm physioball push-up. This exercise actually imitates movements performed on the field. For example, this will help the football player lock his tricep muscle in the event that he receives an offensive tackle and is forced to move backward.

If you are an athlete looking to improve your game by adding this workout program to your current program, please to take care to consult first and foremost your football coach or physical therapist. This may be too much for you, and if it isn’t, you may need a program that will challenge you even more.